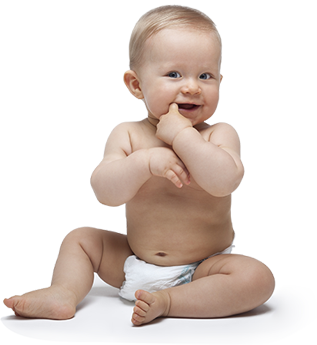 What are you looking for?

Your baby is strongly influenced by the environment, daily activities and routines. A predictable routine (sequence of activities) including a wind down period (for example, meal, bath, cleaning teeth, story time, cuddle and kiss, and into the cot/bed) helps your child establish good sleep patterns.

Your baby’s night-time routine can be as simple as three or four steps. For babies under 12 months, start with a relaxing, bath, then try a gentle massage but check they’re enjoying it (some babies don’t). Change baby into pyjamas and using a soft, low voice, read a story or sing some rhymes. Finish with cuddles, and place your baby on her back, in her own bed. Turn out the lights and leave the room.

Indicators for sleeping through the night

For your baby to sleep through the night, she must be mature enough to do these three things:

Why your baby wakes up at night

So, why do some parents have to get up for their babies, while other parents don’t seem to get up or they say they don’t get up? Well, there’s a reason.

When settling after 3 months of age, most babies begin to sustain longer periods of sleep and will settle themselves back to sleep after waking. What differs between each baby is that some of them, maybe yours, will wake up at least once through the night and call out to you when she’s in that transitional stage between sleeping and waking. She might be trying to self-settle but she still calls anyway. If that’s your baby, she’s called a 'signaller’, which simply means she likes to call out to you and tell you: ‘Don’t forget I’m here and maybe I need some help here – not sure.’

The babies who have a reputation for sleeping through the 12 hours still wake up during their long sleep but they don’t call out in the transitional stage. They are in their bed doing their own thing – they’ve pretty much got it sorted on most nights. These babies are mostly able to put themselves back to sleep without any help from their parent. So, even though these babies are waking one to three times a night, they don’t always call when they need to resettle. Their parents don’t hear them and they will tell you, ‘My baby sleeps through the night without waking.’ You might feel bad and a failure. But their baby won’t sleep through every night; there will be nights when their baby is sick or she’ll forget how to settle and need some help. That’s normal, because most babies will continue to wake and need help on some nights of the week.

Why do some babies keep calling out when they wake up at night, while others don’t? It’s believed the way you put your baby to sleep and how you respond when she calls out to you at night have an effect on how she self-settles, both when you put her to sleep and when she wakes during that transitional stage during sleep cycles. The more you repeat a routine with her, the more the routine will become a positive feedback loop or a vicious circle. So, for example, if you respond very quickly every time she calls, she won’t have an opportunity to self-settle.

Also, other difficulties, such as family stress, postnatal depression, anxiety, colic, gastro-esophageal reflux, medical problems and feeding difficulties, are all reasons why babies wake and call out for comfort rather than self-settle.

Night waking is normal because all babies wake at night.

And here’s another thing. If you are thinking that sleeping through the night is an achievement for your baby rather than a normal developmental process, then that can change the way you feel about yourself and your baby, especially if your expectations aren’t met.

There are a number of reasons why some sleep approaches don’t produce the results parents were hoping to see in certain circumstances. The approach may not have taken into account such important things as:

Scenario: calling out to you at night

You may or may not have a bedtime routine with your baby. A common routine would be a bath, pyjamas, stories, rocking, singing and feeding her to sleep. This might be quite a long routine. Your baby may then sleep for 2 to 3 hours. When your baby wakes up from one of her normal sleep cycles, it’s dark, she’s on her own and she misses all those nice bedtime routines you do. She really likes you being with her when she wakes up at night because you provide her with all the nice, comforting bedtime routines – feeding, rocking or singing her back to sleep.

This is the problem. Your baby hasn’t had to develop her own ways of self-settling, so once she wakes up she has to call out for your help to get back to sleep. When you come to her, she’s very glad to see you, but probably just as tired and grumpy as you. She’s having broken sleep as well.

The difficulty for you is that she doesn’t know how tired you are or that she’s woken you up three times already. She doesn’t have the capacity to consider your point of view yet. Children only learn that after they experience someone considering their point of view first. That’s empathy. So, your little baby can’t empathise with you or make any decisions about the problem you both have; she just feels she needs you to go through the usual routine that helps her go to sleep, so instinctively she calls for you. You don’t know how else to get her to go back to sleep either, so you go through the usual routine as well.

Both of you have developed a night-time routine, it’s just that it’s not helpful to do this routine again in the middle of the night.

The second sleep problem that may occur over the next few months is that your baby may find soothing herself back to sleep after waking between sleep cycles quite difficult.

There is some debate about why some babies aren’t able to soothe themselves to sleep. These are the two possible reasons:

Both these reasons are very common, and neither you nor your baby is to blame. This is a bit like the chicken or the egg scenario. If your baby’s sleep development is a little immature, then of course you’re going to attend to her and try to put her to sleep. What can then happen is your baby can begin to associate your presence and your method of putting her to sleep with going to sleep.

Or you might mistake the little noises she makes when she wakes as calls for help, and you go to her too quickly. Once again, she begins to associate needing you to be with her in order for her to go back to sleep. These are called ‘sleep associations’, which basically means that whatever you do to put your baby to sleep – such as feed her or hold her until she’s asleep and then put her into her bed when she’s asleep – she will expect the same from you each time she wakes up, even throughout the night.

Every baby deserves to sleep like a baby. With your support they can. Donate today!
Donate